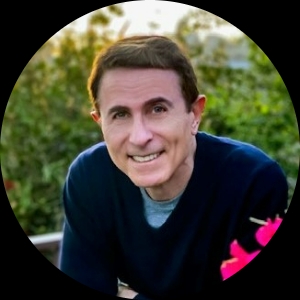 Gary Goldstein writes for film, TV and the stage, and is also now a two-time author.

He has written more than 15 produced telefilms (including the 2022 Hallmark Channel hit, “Lights, Camera, Christmas!”) plus the indie features “If You Only Knew,” “Politics of Love” and “Mr. 365.” Gary has also sold or optioned many original screenplays, has a string of episodic TV credits and has sold half-hour pilots to NBC and Warner Bros TV.

He was represented on the Los Angeles stage in 2017 with the World Premiere of his acclaimed three-sisters dramedy "April, May & June," produced by Theatre 40 of Beverly Hills. It won five Broadway World award nominations including Best Local Production.

Other L.A. stage credits include the comedies "Just Men," "Parental Discretion" and "Three Grooms and a Bride," which all enjoyed long, well-reviewed runs. Gary’s family dramedy "Curtain Call" premiered at Carmel, CA's Pacific Repertory Theatre, while "Dinner at the Harbor Reef," a drama "based on fact, rumor and Hollywood," debuted in a staged reading in 2019 at Beverly Hills' Theatre 40.

Gary has also been a contributing film reviewer and feature writer for the Los Angeles Times since 2007. His award-winning debut novel, “The Last Birthday Party,” was published August 2021 by Hadleigh House. His second novel, the family drama “The Mother I Never Had,” was published October 2022. It was named one of the “Must-Read Books of Fall 2022” by Town & Country magazine.

“Correspondent!” When a famously tough, intrepid, but secretly neurotic cable news foreign correspondent has a meltdown while covering a violent riot in an obscure country, he finds he’s unable to square his heroic image and mounting phobias. But is there an exit plan to his ego-feeding, high-paying, high-wire act of a job? What’s a national treasure to do?