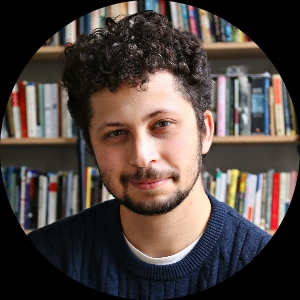 Frank Spiro is a New York based screenwriter, comedian, filmmaker, and NBA enthusiast. He is the writer of Bridesman, a webseries being made by Grindr, which you can read about here: https://deadline.com/2021/03/grindr-first-original-scripted-series-bridesman-lgbtq-1234705155/

Frank likes to write absurdist, surrealist comedy scripts, articles about the NBA, and whatever else is catching his fascination.

Frank’s work has been featured on The Black List website numerous times, appeared on the top 100 feature script list of 2019 by Launchpad Tracking Board, as well as their top 100 pilots list of 2018, and placed in various other screenwriting competitions. Frank is a graduate of the Harold Ramis Film School at The Second City in Chicago, IL — the first film school of its kind to solely teach comedic filmmaking.

PEOPLE IN THE CITY WRITING ABOUT THE COUNTRY

When Nate Wilson-Gardner finishes what he thinks is the next great American novel, his life gets flipped around when he meets a much more established artist.

SITTING IN THE CRESCENT CITY

When Faye Bordeaux, heiress to the hot sauce fortune of New Orleans, goes missing, it’s up to her childhood best friend, Bernadette Fotenot, an apathetic gift shop worker, to delve into the dark, ruthlessly exuberant underbelly of New Orleans to find her.

Max Silverstein fills his days with the peculiar activity of following random people through New York City, narrating made up lives and colorful backstories for his subjects—that is, until his brother, David, decides to visit, which forces Max to grapple with his grief over his mother’s passing and his atrophied relationship with his brother.

A stormy Thanksgiving on Fire Island tests the bonds of a family of five polyamorous gay men and their beliefs about the nature of love.

TRAXATE™ PHARMACEUTICALS PRESENTS: “WHAT GOES UP, MUST GET DOWN”: A SUPLI© ORIGINAL REALITY SERIES EXPLORING THE BEYOND

When Arlo Harden's anti-depressants stop working, he's forced to sign up for a new experimental new drug trial taking place on a space trip to a new planet, facilitated by the United States army and filmed by a reality television streaming service.

When news breaks that a meteor is heading for Los Angeles in 48 hours, a diverse group of people find themselves stuck in a stand-still traffic jam as they try to make sense of their impending doom.

An overly serious rabbinical student in the 1500s who’s been kicked out of his class gets a second chance when he turns to a Dybbuk who helps him, with the stipulation that he also pursue the Dybbuk's dream of pop-stardom.

THE DESTRUCTION OF SAM PATTERSON

Just when chronic under achiever Sam Patterson begins to get her film career off the ground, she runs into a frustrating problem: All her movies have been made before, by another director.

When Charles Butain is given a promotion to watch a secret door he is not allowed to enter, he does the unthinkable: he enters.