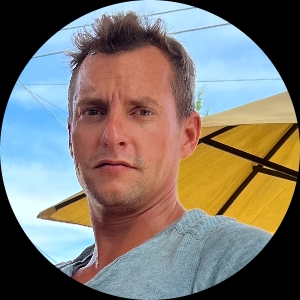 FRANK REINA is the writer, director, and producer of the comedy feature film, “Scrambled.”

Filled with a sense of adventure, Frank has always been guided by the sheer power of storytelling. Born in the Caribbean island of Puerto Rico, he jumped into a completely different culture, when his family relocated to a small town just outside of Boston during his teenage years. Always an avid movie buff, Frank studied film at Hofstra University in New York, and then moved to Los Angeles to pursue his lifelong dream of making movies.

Not one to reject an outstanding opportunity, Frank dove into the world of stunts by working for the best action director in the world, Spiro Razatos, the wunderkind orchestrator of the most breathtaking and heart pumping action sequences in “The Fast and the Furious” franchise.

During his free time, Frank enjoys traveling, writing poetry, yoga, expanding his spirituality, spending time with family and friends, and true to his Caribbean roots, basking at the beach. He is also an officiated minister.

FRANK REINA is a stalwart of integrity, and on a never-ending quest of higher achievement, both personal and professional… always attuned for a new story – not just to tell, but also to show.