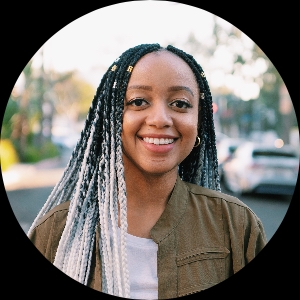 Fiona Kida is a Tanzanian-American filmmaker and musician from Nashville, now based in Los Angeles. She graduated from USC majoring in Film & TV Production and minoring in Business Entrepreneurship in 2019. She has worked as an Associate Producer at Google’s Creative Lab in NYC, an Office PA at Annapurna, Exec Assistant to the CEO of Media Res, and interned at Bad Robot, NBCUniversal, and Pixomondo. She is currently a Writer's Assistant on Bridgerton (Shondaland/ Netflix).

She’s produced shorts that have screened at 30+ int’l festivals and been nominated for a student Emmy in directing. She's had a feature she wrote get into the 2nd round of Sundance’s 2021 Dev Track. And last year, she won a 2021 WAVE Grant to produce “Blue Hour”, a short film she wrote, directed, produced, and composed the music for.

Tina, a black aspiring actress from the white suburbs of Nashville, navigates doing whatever it takes to make her dreams come true in Los Angeles - even if it includes becoming someone else.