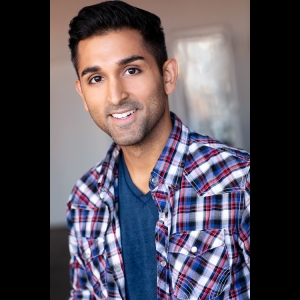 Feraz Ozel was recruited by the CIA, but turned it down for a life in comedy. Now, this LA based writer-performer tours internationally providing crowds with an energetic brand of insightful stand-up, often stemming from his perspectives as an Afghani-Pakistani American. Currently, he is a staff writer on season 5 of ABC's hit sitcom American Housewife. Prior to that, he was accepted as a program writer into Walt Disney Television's prestigious Writing Program.

As an actor, Feraz has appeared on national television on 2 Broke Girls, Hollywood Darlings, Comics Unleashed, The Doctors, and Hulu's Coming to the Stage, and the feature film "Hollywood Dirt." Feraz also directed his first short film "Curious Georgina," which he starred in along with Helen Hong and Bobby Lee. The film screened at Just For Laughs in Montreal, and got picked up by Kevin Hart's LOL Network.

Feraz's has caught the attention of many publications around the country, and he has been featured in the LA Times, The Atlantic Magazine, Rolling Stone, and several documentaries. Feraz also performed in the 2016 CBS Diversity Showcase, and wrote several sketches in the show. His stand-up album "Chillennial" charted in Billboard's top 10, and iTunes' top 3 for comedy albums, and his tracks regularly play on Sirius XM. Viral clips of his stand up have over 20 million views and have been distributed by mega-blogs like NowThis and LADbible.

He is represented by Abrams Artists Agency in LA, and his manager Peter Rosegarten.