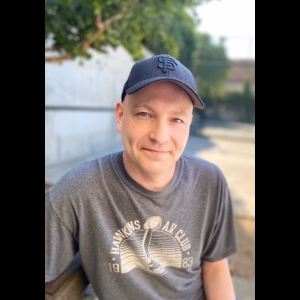 Raised equally by his hardworking single mom and the family television set, Ervin developed a love of movies at an early age - probably while at the drive-in in the back of the family station wagon watching wholly inappropriate horror movies - but never thought a poor kid from New Jersey could make it. While working at a comic book store and dreaming the days away, Ervin thought, "Why not me?" and started writing. Eventually, he moved to San Francisco, where his creative life truly began. He published a novel, THE MANY LIVES OF LILITH LANE, which was one of Amazon's original Kindle Serials, but something still wasn't right. Ervin wanted to write for the MOVIES. He wanted to see his work come alive onscreen.

And that's just what he's doing. His horror comedy script, WHEN HORROR MET SALLY, made the 2018 Bloodlist, and was Optioned by JML Film Corp. His dark romantic comedy, POSSESSIVE, was Optioned by Ashputtel Productions, and his sci-fi thriller FIVE MINUTES DEAD was just Optioned by More Than A Handful Productions.

Ervin continues to write every day, while trying to entertain his 6-year-old daughter, Amelie.

WHEN HORROR MET SALLY, which made the Bloodlist in 2018 and was Optioned by J.M.L Film Corp.

A former assassin whose wife disappeared 9 months earlier is hired by a mysterious client to protect a pregnant woman, but the woman turns out to be his wife, and the baby's father is the Devil.

A failed actor struggles to care for his daughters after his wife's death, but a childlike Demon whose touch is deadly threatens to take everything from him.

When a strangely cheerful Final Girl discovers she was supposed to be in a romantic comedy all along, she tries to return to her rightful, happy reality as the killer closes in.

After a passing comet releases a virus that turns love fatal, a lonely dating site entrepreneur creates an algorithm matching couples who won't fall in love, and suddenly finds herself in a non-love triangle as she tries to save the world.

After a botched forced Exorcism unleashes Hell on a small conservative town, a young trans woman must save the very people who tormented and shunned her a decade earlier.