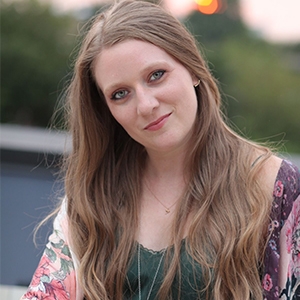 Erin Doyle Cooper is an award winning filmmaker and creative director whose career has spanned indie film, experiential production design, and advertising. She made her first short film Vlog in 2009, and that same year, recorded an EP of indie rock for kids to compliment her puppet-musical-pilot Princess Elleanora and the Muddy Sneakers. As a Creative Director, she’s overseen award-winning work for brands including MasterCard, Budweiser, and Pepsi, where she led creative for the promotion of Lady Gaga’s Halftime Show and the 2018 Super Bowl spot starring Cindy Crawford. She’s also directed spots for major brands including Midol and Nature Made.

As a filmmaker, Erin focuses on stories that challenge people’s ingrained perceptions, and loves using genre as a tool. Her most recent film Believe Her, starring Allison Tolman, premiered at the SCAD Savannah Film Festival, where it won Best Global Short: Narrative. She spent quarantine developing several feature scripts, and since production reopened, has produced a short called Big Sur for a fellow LAMDA alum, and wrote/produced/directed a short called True Love Waits based on her experience growing up in Purity Culture. She is currently in post on True Love Waits, and in pre-production on a proof of concept for her Western Horror film The Invaders. Erin holds a BFA in Acting from SUNY Buffalo, a post-graduate certificate from the London Academy of Music and Dramatic Arts (LAMDA), and studied improv and sketch at UCB. She lives in LA, where she recently completed the Women in Film Mentoring Program as a multi-hyphenate, with mentors Rose Catherine Pickney, Melissa Darmon, and Ramaa Mosley.