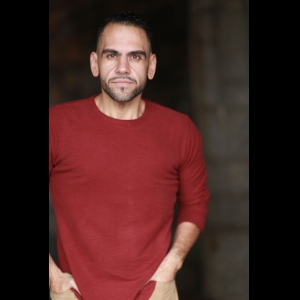 Dominic Colón - Dominic is an award winning actor, writer, producer and filmmaker born and raised in the Bronx, New York.  Most recognized for his work as Manny Spamboni on the Emmy Award Winning Children’s Show, The Electric Company, Dominic has appeared in over 60 movies and television shows, including Mr. Robot, Bull, 4 appearances on Law and Order: SVU and a recurring role opposite Benicio Del Toro, Paul Dano, and Patricia Arquette in Ben Stiller’s critically acclaimed Golden Globe nominated series Escape at Dannemora.

Dominic wrote and produced the HBO Award winning short film CRUSH and his second short film, SKIN, a semi-autobiographical film about a man who is afraid to have sex without a shirt on after extreme weight loss, premiered at the 2017 HBO/New York Latino Film Festival.  CRUSH and SKIN were recently optioned by HereTV, North America’s largest distributor of LGBT Content.  The script for his feature film, WERQ IT! and the script for his short form series PAPI, were both selected to be a part of the 2017 & 2018 NALIP Latino Media Market. In addition to his professional career as an actor and writer, Dominic has over 20 years of experience as a teaching artist with the Public Theater, Manhattan Theater Club and the Theater Development Fund teaching acting, and playwriting at various High Schools, jails, and juvenile justice facilities throughout NYC.

PAPI, is a half hour dramedy that follows the relationship between Kilo, a young closeted Barber from the Bronx and his foul mouthed six year old daughter, Jaida, who was unexpectedly left in his custody, on his 21st birthday. As Kilo tries to navigate becoming an adult, while avoiding the temptations of Bronx streets and understanding his fluid sexuality, he embarks on transformative journey as he discovers what it takes to be a good "Papi".