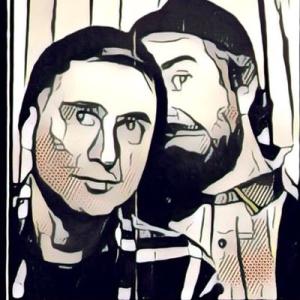 For over a decade, Christian Gridelli & Hunter Norris are award-winning filmmakers who have been writing, directing, producing, and editing in Chicago as DimeStore Films. Never wanting to feel too comfortable (and as classic Midwesterners, they take pride in feeling unsatisfied), their work includes short films, web series’, feature films, commercials, music videos, and audio plays. Their passion lies in exploring story and character above all and while they've never read "Save the Cat," they're told they write like they did. In 2017, Christian & Hunter released their first feature film, The Origins of Wit and Humor. The film co-stars Joe Hursley (Resident Evil) and Steve Lemme (of the comedy troupe Broken Lizard). Recently, they were tapped to do a complete rewrite on the forthcoming film adaptation of the Image Comics title, "Revival.” Christian & Hunter need to tell stories, they want to make something visually captivating, and if they don't do it in film, they’ll probably take too long to tell you about it at a party and nobody wants that.

A noir tale of an ex private eye and lifelong sinner of inaction sent to find out how people are escaping a small, rural outpost of Hell, or risk abandonment in the venomous landscape.

In the mid 90s, an Indian-American girl becomes obsessed with a late ­night horror show when she can't tell if the videos are snuff films or just realistic schlock. When she hunts for the broadcast's origin, the gruesome videos leak into her reality as the show's ghoulish host makes her his prey.