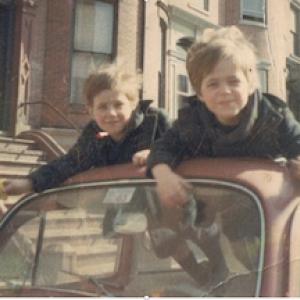 David Margulis is a credited Writer, Producer & Director. Dave studied Directing at NYU Jr. narrative and is certificated at UCLA Screenwriting as a founding member of their Professional Program. Dave is dedicated to independent films and production. Often working on studio pictures but always welcoming independent films. As an independent, David enjoys many facets of filmmaking and enjoys working on both sides of the camera.

Dave first entered theater at 12 years old when he joined the cast of, The Young People’s Theater of Maine, an acting troupe made up of Jr. High School students. Performing throughout New England for primary schoolers. High School and theater study showcase performances included class plays, Drama club and finished with a high school senior class production of Shakespeare’s, A Midsummer’s Night Dream as Oberon. As an athlete, Dave played hockey as a high scoring, hard hitting defenseman and excelled in its sister sport, soccer. The Freeport Falcons of Maine won an unprecedented Three State Championship Crowns under the auspices of coach Steven York, where Dave lettered as a Varsity mid-fielder and wing back. Inspiration for one of many scripts Dave has written, “Seventy-Nine Falcons” a coming of age comedy.

As a freshman in college with the Russel Hall players of Maine, Dave performed in the role of, The Games Master in the Elaine May play, “Adaptation”. Then, came appearances in commercials and Industrial films. Again, balancing performances from stage to ice and field, Dave played varsity soccer and hockey, sporting a freshly broken nose from a retaliatory high stick for scoring the winning goal in his last collegiate game. No matter, Dave joined the professional cast of Scapino! With the Cape Cod Playhouse in Hyannis, Mass as Leandro. Then, again voiced a character in Steven Oney’s Radio Plays of Cape Cod Radio Theater.

Then, traveling to the Caribbean, to chase dreams, Dave pursued his off camera work in film and commercial productions as a production assistant in each department for SunBow Locations, a film location service in the US Virgin Islands. No ice here to skate upon except in a stiff rum drink but opportunities to pursue filmmaking on a professional level were. Perhaps on a quest to escape, Dave found himself. An uncanny number of commercials are shot in the sunny winters of the Caribbean. Here, Dave landed several movie roles and performed opposite Cliff Robertson in the TV movie. “Dreams Of Gold, The Mel Fisher Story” and landed several national commercials. Commercial appearances paved into the professional ranks with a long running National Commercial for Minolta. International work included print and television for Kent Cigarettes and other world class brands. It afforded a self-paid college education, finishing at NYU undergrad where David took his hard earned residual checks to make films in the Director’s program in Junior Narrative, where he Wrote, Produced and Directed, “Escape from Decadence”, a 20 minute 16mm film in the film-noir tradition. Also while at NYU, David worked as a 2ND AD in several low budget films, and as a Producer’s intern in the office of Benjamin Melnikker and Michael Uslan, producers of the Batman franchise. This experience gained Dave work in Los Angeles when he left the tropical paradise of the Caribbean and moved to California where he then pursued screenwriting at UCLA. In Dave’s last year at UCLA, while finishing up the last of seven feature scripts, Dave Wrote, Produced and Directed another 16mm film, The Bear Climbed Over The Mountain, a short comedy. It can be found on his IMDB reels page. His script, Cleveland’s Garage placed in the UCLA screenwriting competition and was also optioned.

Dave, a traveler and frequent visitor to New Orleans, the only Caribbean flavored city in the United States, finally settled here to pursue his writing. Dave quickly involved himself in music production and filmmaking. Producing, “The Soiree’, a music event in City Park, headlining national act, Derek Trucks and a select choice of local New Orleans based musicians; Any J. Forest, Anders Osborne, Mike Hood, The Lost Bayou Ramblers and others. Dave has enjoyed success with the emergence of Louisiana becoming a first choice for film production. David works on large studio projects as a Location Manager and Scout, assisting Directors and Producers to see their scripts come to life by presenting visceral locations for their film to be shot. Among other large studio films, David scouted the Curious Case of Benjamin Button. Dave is also very dedicated to independent film and photography as well as those little low budget art pieces, and enjoys working diligently no matter what size the project or budget.

Dave continues to write and direct in independent theater and is working with a with a development slate and financiers to independently produce feature films. All the while operating a location service based in New Orleans for the entire South. Ace Locations -Louisiana!, offering Producing, Location Scouting and Location Management for the entertainment industry. He lives on the shores of Lake Pontchartrain, in Louisiana, a wonderful place to raise their children with his remarkable wife, Raquel.

Tom is a self diagnosed delusional hypochondriac. He is afraid of most everything but in a courtroom he is a ruthless lawyer. In the intangible world of arguing, he is master. His co-dependent girl of ten years is getting the marriage itch. She’s going to cut him off from sex if he doesn’t pop the question. Tom must overcome his fears of commitment stemming from his childhood to stay in the bedroom. Now arguing to be engaged to be engaged, a wealthy client pays for a trip to Germany for Tom to find his insane son, an Actor re-creating the Kings wars of King Leopold. Here in Germany, the pretend wars aren’t so fake and Tom is learning the value of true courage. When Tom's girl is kidnapped, he must uncover the frozen triangle, a diamond smuggling plot that turns on him, as he gets closer to the truth. Now the FBI and Interpol are after him, or are they? Tom must find his true love and face the source of all his fears.

Joe has followed in his illegitimate father’s footsteps. He also makes the same mistakes. Joe is drawn into the mobster underworld his father leads but must choose his own destiny. As the story unfolds, we find out his father’s story and that Joe will find that history does repeat itself.