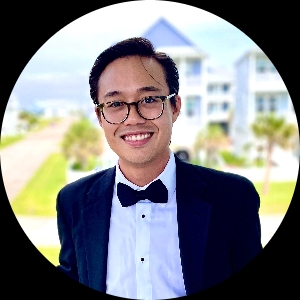 I am a Los Angeles Based, Award-Winning Vietnamese-American Filmmaker from Houston, Texas. In 2019, I quit my day job in Commercial Real Estate and moved to Los Angeles to pursue Film and Television. Since then, I have acquired more than 50 screen credits in TV production ranging from VFX Coordinator to Production Supervisor – from Marvel Studios to HBO & A24. I am the first generation child of two Vietnamese refugees who escaped in the 1970's. My diverse background and experiences have allowed me to write from a place in my heart that is absolutely pure and genuine -- always striving to tell stories full of life and emotion. When I am not writing spec feature scripts or making television, I am making micro-budget/non-budget short films with my producing partner, Jacob Mullen. Together in the last two years, our four short films (written, directed and produced by us) have gone on to be selected, nominated and/or won in the festival circuit (The Beverly Hills Film Festival, Indie Short Fest, Vail Film Festival, Venice Short Festival, Austin After Dark, Hollywood Gold Festival, Athens International Film Festival, Hollywood Blood Film Festival, Los Angeles Film Awards). I am looking to making a lasting legacy in Hollywood as a unique Vietnamese-American Filmmaker from Texas.

THE FALL OF SAIGON

Six individuals share intersecting storylines and interchangeable fates during the days leading up to the fall of Saigon and the end of the Vietnam War.

As the Persian Oil Crisis nears, a group of greedy Texas men turn some found oil into a series of illegal and nerve-wracking business dealings, ultimately getting tied up with a deadly Saudi Prince.

An age old rivalry of Laborites versus Capitalists is re-examined through the journey of a Union Leader and his brother as their fates lead up to one of the most devastating domestic massacres ever.