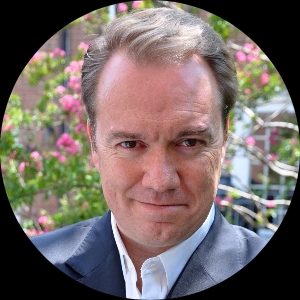 Angus Morrison is a Pulitzer-nominated, former financial journalist at Bloomberg, a former speechwriter for U.S. Secretary of State Colin Powell and for IBM's senior executive suite, and a former Senior Policy Advisor at the U.S. State Department for Europe and Eurasia. He is the author of the financial and technology thriller, Bandwidth, featuring protagonist, Hayden Campbell, and the children's book, Backbacks & Baguettes. He lives with his wife and son in Virginia. His website is www.angusmorrison.net. You can follow him on Twitter @bandwidthbook.

In college he flipped hamburgers and fixed fences in Wyoming. After graduation, he moved to Brussels where he lived in a nun's cell in a former convent that had been converted into communal living quarters. In his free time he frequented a small Flemish pub that counted a large black Bouvier named "Zeus" as its most loyal patron.

The Berlin Wall fell while Morrison was in Brussels. He hitchhiked from Brussels to Budapest in cars, motorcycles and fruit trucks. The first thing he saw upon arrival in Hungary were Cold War statues torn down as the communist star was being wrenched off the parliament by a crane. He likes coffee, a well-made martini,and toast.

A CIA operative-turned speechwriter navigates the politics of Washington and Silicon Valley as the U.S. and China race to build a rare-earth metal mine in Africa.