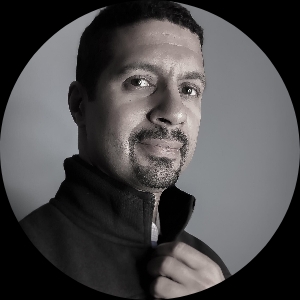 Damian is an American diplomat who serves wherever the State Department sends him. He has previously served in Pakistan, Tajikistan, Georgia, Russia, and Zimbabwe. Damian Wampler is a screenwriter who honed his craft by writing for comics and theater. His background in fine art documentary photography gave him the tools to think visually, and as the author of three plays, Damian learned to write snappy and insightful stories. And his globetrotting lifestyle, which began as a Peace Corps volunteer in Kyrgyzstan in 1999 and carries on today in his position as a US diplomat, has influenced and inspired his visionary writing. He is the author of the graphic novels Sevara (2015) and Monitor (2020), as well as the short comic Kingdom of Ashes which was included in Geometry Literary Magazine (June 2019). Monsterly, a short comic included in the award-winning Gwan Anthology #2 (2019), was recently acquired by Markosia Enterprises for a 2021 release as a graphic novel. Arrowhead, a sci-fi adaptation of Moby Dick, will be published in 2021 by Lucha Comics.

THE MAN WHO SLEPT ON HIS BREATH

When a brilliant but bankrupt photographer falls in love with the art buyer for the richest man in New York, he must decide whether to live a life with her or pursue his dream of documenting the cultures of every Native American tribe in North America before they vanish from the earth.

When a young monster is killed at the hands of human cops, a suburban family must choose a side as riots between humans and monsters rage across the United States.