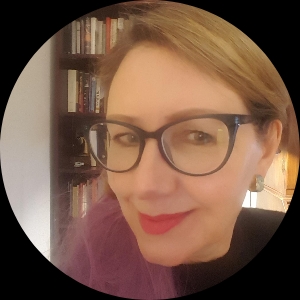 C.S. Hanson is a playwright with off Broadway and regional credits. Most recently, Hanson was commissioned by Working Theatre and Nomad Theatrical to write for the outdoor, immersive theatrical production BUTTERFLY EFFECT NYC, which was produced in October 2021 in NYC; for this collaboration, she created and developed the character of Oscar, a piano tuner who is haunted by memories of life in Hell’s Kitchen. Also for Nomad Theatrical, she wrote the microfilm MY POST-PRODUCTION WORLD, starring Ravin Patterson. Also in 2021, Hanson’s essay “Wanderer” was published by Penmen Review. In early 2020, Hanson was a resident artist at The Cell Theatre in NY, where her play I COULD NEVER LIVE HERE (now titled DAKOTA) had a reading directed by Kira Simring. Throughout 2020, several plays were produced via Zoom, including SHORT LEASH in the Coronavirus Play Festival (director, Annie G. Levy, Emerson College); STALK ME, BABY in the Women in Comedy Play Series, KIT International (director, Carlotta Brentan; producer, Laura Caparrotti); and DOUBLE D at Theater for the New City (director, the late George Ferencz).

Hanson’s plays have been produced in NYC at the Cherry Lane, Theater for the New City, The Brick, Metropolitan Playhouse, Estrogenius, among others. Her plays have been in two International Fringe Festivals: Montreal and New York. Plays have been developed thanks to The Lark, The Cell, Lake George Theater Lab, EST, LaMaMa, Abingdon Theatre, Naked Angels, and NJ Rep. Hanson’s short play STALK ME, BABY has been produced at universities and colleges throughout the U.S. and globally.

Her plays have been published by Smith and Kraus and by Applause Cinema and Books. She is a member of the Dramatists Guild of America, Honor Roll, and NY Women in Film and TV.