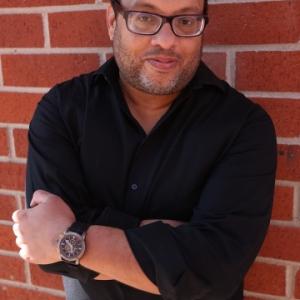 Disney General Entertainment Writing Program Finalist and WGA-East member Colin Francis Costello is a biracial comedy and genre writer. He has won and finished as a finalist in numerous screenplay contests with his comedy and genre scripts.

After writing two episodes for the PBSKids series, "Moochie Kalala Detective's Club," the educational show was nominated for a Midwest Emmy award. His debut short film, which he wrote and directed, 2018’s "The After Party" has played in 25 festivals internationally and won five. His other short film, 2019’s "Dreamwisher" has won ten awards in the United States and internationally. Colin most recently won Best Director and Best Comedy for an LGBT webseries titled “From Russia with Motive” Colin’s writing has gotten the attention of

In late 2018, he was selected by The Champions’ Program supported by the WGA Committee of Black Writers and designed to obtain writers of color representation or staffed. It was based on his one-hour pilot “Bad Cook” about a Las Vegas sous chef and her rise to becoming a crime boss.

When Colin’s not writing (which is rare), he is an active member of the WGA West Committee of Black Writers, Activities Committee and Genre Committee. Colin volunteers for Young Storytellers, helping Latinx and Black 5th graders develop their screenwriting voices. He also teaches screenwriting at UCLA Extension and is a freelance journalist for Reel 360, an online outlet that covers advertising and entertainment.

The Stream, The After Party, Committed, Dreamwisher
WGAE
Journalism
« »

After a car crash leaves his best friend believing that he is a superhero, a pudgy geek dons a cape to help his delusional “superfriend” protect a small town from a very big threat.

After a massive earthquake strikes Chicago, a hesitant African American female transit cop must lead a ragtag group of terrified subway passengers 173 feet to the surface before the Chicago River floods the tunnels and drowns them.

After a cosmetics company's top four models are exposed to chemically-tainted make up, they discover they now have super powers and must put aside their differences to save Angel City.

While serving community service at an inner city Philadelphia stable, a lonely teen boy forms an unbreakable bond with a former thoroughbred as they become the talk of an underground horse racing circuit