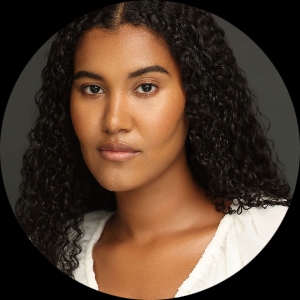 Chloe Simone Crawford is a New York born actor, writer and director. She began her professional acting career at age 4 and went on to major in Drama and Theater Studies at the Professional Performing Arts School and Vassar College while advised by Emmy nominee Arian Moayed (Succession) and Broadway alum Shona Tucker (To Kill a Mockingbird).

Chloe took time away from her degree to purse screenwriting, with the hopes of diversifying the representation of black women in film. For three years she was mentored and coached by screenwriter and producer Michael Reilly (TILL) while she wrote her first feature Colored Actress, which made her a 2022 The Black List Feature Lab Finalist and a 2021 WIF X The Black List Feature Residency Semi-Finalist.

Chloe is currently in pre-production for her first short film A Plague of Wasps, which she plans to direct, produced by Alexandra Qin (Thirstygirl).

In 1940’s Hollywood an ambitious black woman paints herself as white in order to win the Best Actress Oscar.