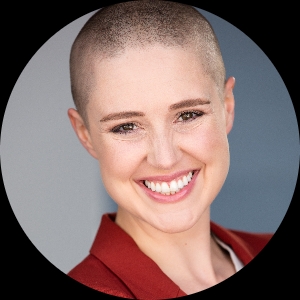 Carly Tatiana Pandža has been an artist since age 5 when she borrowed the family VHS camera and put on productions with her cousins in her grandmother’s house. As soon as Carly could speak she used her voice to tell stories. In college she discovered the power of art to champion social justice as she participated in The Laramie Project and The Vagina Monologues. She received her double BFA from Chapman University for Film Production and Screen Acting.

Carly has studied performing under The Old Globe in San Diego, A Noise Within in Pasadena and The National Theatre School of Ireland in Dublin. She co-wrote and directed “Pieces Of Carra'' which showed a bi-racial daughter's love for her mother through music and memories, exploring race, religion, and forgiveness. Her 2010 documentary short “Shadows in the Forest '' addressed the deforestation of homes for indigenious communities in Cameroon, Africa. Carly was the writer for a team at Disney in 2011. She wrote original content for a new Tween franchise that later became Disney Channel's "Descendants.” In 2014 Carly produced the successful “You Are Not Your Hair'' charity event in LA. This led to her 2015 feature-length documentary entitled “Hair” following her own journey exploring the cultural identity of hair.

Carly is passionate about women and raising the voices of underrepresented groups through the arts. She believes art has the power to unite communities through inclusivity. She started HER Theatre Company in 2019 as an outlet for elevating the visibility of female artists.

When their creative talents mysteriously become superpowers and arts are defunded at their school, the unlikely duo of a resigned English teacher and a bubbly Music rookie must team up to save the arts and the world, before their abilities and mission are discovered and stopped by their bitter Principal.

A financially strapped, guarded daycare teacher has to keep her nighttime profession as a stripper secret from her employer and her new budding relationship with her favorite student's father.

After her brother attempts suicide, a young writer cancels holiday plans with her serious boyfriend and is forced to return home for Thanksgiving after 3 years of absence. Now she must reckon with her kooky, ”cursed”, dysfunctional family, her past and the childhood love that she left behind.

When a quirky, dysfunctional theatre company loses all its funding, company members must work together with their egomaniac artistic director or struggle and fail alone.