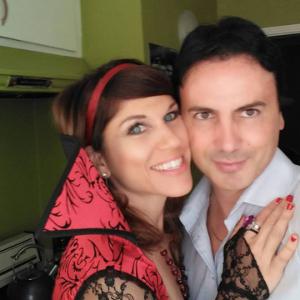 Carlo is a screenwriter, published novelist and actor. Formerly, he was a Captain of the Carabinieri, the Italian equivalent of the FBI, for 12 years, where he investigated mafia, terrorism and violent crimes. One of his scripts, E-Ghost, was acquired by Isabella Ragona (Stranded, Forsaken) of Moving Pictures Media and will be executive-produced by James D. Brubaker (Chef, Liar and Liar, Rocky III.) Carlo’s exposé novel, Radioactive Nightmare - Italy and the Illegal Trafficking of Nuclear Waste in the World, published in Italy in 2017, was awarded the prestigious "Livatino Award" for its contribution in the fight against organized crime. His previous action/thriller/sci-fi script, Mindgate, was picked up by producer Kane Lee. As an actor, Carlo has most recently worked with Francis Ford Coppola in his latest project, Distant Vision.

Erin is a screenwriter, actress and singer. She also studied music at the prestigious Manhattan School of Music (singing Broadway and opera.) Her TV Pilot Harlots & Hooligans has attached Narcos creator and showrunner Paul Eckstein as Producer/ Writer and Vivica Fox as Star/ EP. As an actress, she most recently booked a series regular role as LA Police Detective Jo Frazier in a new narrative-procedural hybrid, Emergency: LA.

Together Carlo and Erin have also written the rom-com/spy parody web series Spy v Spia, in which they will star. Gretchen Landau (Coppola’s Distant Vision, Folk) is attached to produce, and Christopher N. Rowley (Bonneville, Molly Moon) will direct.

A near-death experience leaves a hardcore CIA Operative with the disruptive ability to see everybody's past. His self-induced isolation ends when terrorists kidnap his loved ones and force him to use his powers against his own country. (WINNER of the Catalina Film Festival and the StoryPros Awards. Finalist and still in the running in many others; see script page for details.)