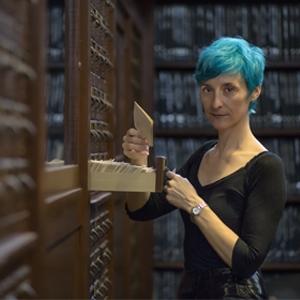 She is the grandchild of Irish gangsters, immigrants, Canadian mennonites and Southern orphans, who grew up in Washington, D.C., escaped to NYC and currently lives in South Central LA. Cari received her BFA from NYU's Tisch School where she was awarded the Artist and Scholar Award, the Playwrights' Horizons Award and the Edie and Lew Wasserman Scholarship. She continued to the AFI Conservatory, where she received her MFA in Screenwriting.

She recently concluded work as a staff writer on a new Ali Baba sci-fi romance series(now in pre-production) and currently has projects in development with showrunner Ed Decter (THERE'S SOMETHING ABOUT MARY, SHADOWHUNTERS), and producers Maor Azran and Thomas Hartmann.

After her Irish mob-boss husband is arrested by the FBI, a strong-willed mother abandons plans to leave him and takes over the family business as a single parent.

Bloodthirsty winter. Rebels. Scabs. Impossible friendship forged in the fire of riots-- Massachusetts, 1912: When the savage textile-mill owners slash workers’ pay, a ferocious young widow must choose—stay silent to save her child, or risk their lives to join the revolution. Based on the insane true story.

In the bizarre world of high-tech prosthetic limb design, an emotionally unavailable female prosthetist finds an unlikely connection with a pain-in-the-ass, former pro-skater when she’s tasked with making him new legs.

A woman who has never finished anything in her life embarks on a bizarre journey that takes her to the cesspool known as the LA River.