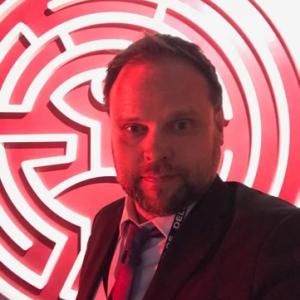 Bruce Branit has seven Emmy nominations for VFX work on shows such as Lost, Star Trek, Breaking Bad and Westworld. But he is better known for his original short films such as 405, a groundbreaking viral short which has been sighted by Neill Blomkamp, Danny Trachtenberg and J.J. Abrams among others as an inspiration in their own filmmaking careers.

STATE OF THE UNION

After a devastating alien attack wipes out almost all of the human race an entitled son of a billionaire must team up with a barista and her aspergers little brother to earn freedom for the surviving one percent of mankind.

The last man alive hears the radio voice of what may be the last woman on Earth. The only problem is, he's not on Earth, and his social robotic companion wants to keep it that way.