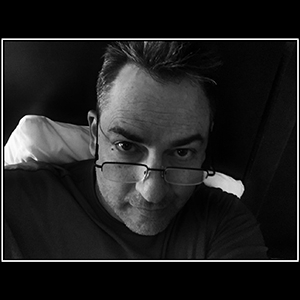 Like a lot of people already in Hollywood, I have spent the better part of my life telling stories in one way or another. Whether it was writing wild tales at school, making movies in the backyard as a kid, or working on some of the biggest feature films ever made, my life has been geared toward being active in the motion picture and television industries.

I began my career as an Editor, Videographer, and Producer at WBGU-TV27 in Ohio and have shot Top Fuel Dragsters, classical music concerts, movie premieres and just about everything in between. As a motion-picture Camera Assistant for over a decade, my resume includes films like Titanic, Broken Arrow, Murder in the First, Star Trek Generations, and Pirates of the Caribbean to name a few. Television credits include such popular shows as NYPD Blue, The X-Files, Star Trek Enterprise, Star Trek Voyager, Strong Medicine, The West Wing, Charmed, and Tales from the Crypt.

I've since transitioned from "production" into shooting "behind-the-scenes" that are used for marketing and promotional purposes, otherwise known as EPK (Electronic Press Kit). Some of the bigger projects I've been a part of are the Fast & Furious and Bourne franchises and a host of others along the way.

I'm a published author too! If you are an aspiring "filmmaker" or already in the professional industry, my book "What I Really Want to Do: On Set in Hollywood" is full of information about working on set. EVERY job on a typical movie set is discussed in detail explaining what everyone has done to get themselves those jobs, what they all actually do all day, and what those professionals can do to move up in the industry. https://www.amazon.com/What-Really-Want-Set-Hollywood/dp/0823099539

I've written several spec feature screenplays in addition to a children's animated series based on the Fast & Furious franchise (unproduced).

See my full CV at www.dzyak.com

SPEC written prior to the passing of Burt Reynolds: Forty years later, BANDIT sends his two nephews back to Texarkana for another truckload of Coors...and a couple of surprise extras come back with them with a newer, faster, and ridiculously relentless SMOKEY in hot pursuit.

Confronted with a seemingly unstoppable gun problem in the United States, the US President realizes that only by attacking his own country can the American people be forced to learn the reality of what the Constitution actually intended regarding the Second Amendment and how it undeniably relates to the system for national defense as envisioned by the Founders.

In this Ghost Adventures meets ALIENS story, Ghost Hunters, filming a triple execution on Death Row, are suddenly thrust into battle with a trio of blood-thirsty ghosts who are bent, first on revenge, and then on escape from the stone walls that have held them so long.

In this Calvin and Hobbes meets Steven Spielberg’s Duel story, a young boy must defeat a killer garbage truck that he’s conjured up and if he doesn’t succeed, he’ll never be able to stand up to the class bully, he won’t get the girl, and the idyllic small town where he lives and plays in an endless Summer will be destroyed.