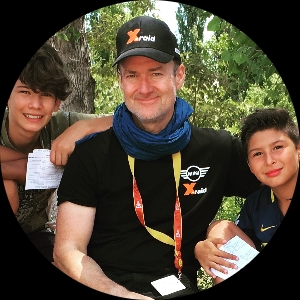 Brian O’Hare is an award-winning writer/producer and former U.S. Marine Corps Captain who graduated from the U.S. Naval Academy at Annapolis. He's originally from Pittsburgh. Brian’s career began in a Baltimore bar, the infamous Club Charles, where director John Waters cast him to appear in his film 'Cry Baby'.

His scripts have been Nicholl Fellowship Quarter and Semi-Finalists.

His fiction has appeared in “War, Literature & the Arts”, “Hobart”, the “New Wave” anthology from “Bone & Ink Press” and others. His work has been nominated for two Pushcart Prizes.

Brian served as visiting artist at the Rhode Island School of Design in Providence, Rhode Island and has lectured on independent producing at Ithaca College and Quinnipiac University.

Predators become prey as a blood-thirsty beast known as the Ghul hunts an elite group of warriors.