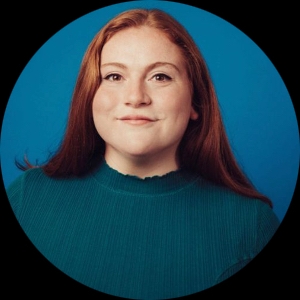 Avery Girion is an award winning writer whose most recent television experience is as a Writer's Assistant on Disney's Secrets of Sulphur Springs where she is co-writing an episode of season 3. She just wrote a series of biographical essays for Rebel Girl Books in conjunction with the Non-Profit Room To Read. Her writing will be published in the next edition of "Good Night Stories for Rebel Girls: Young Changemakers." Along with the essays she developed a series of animated shorts, which will be distributed soon.

Avery studied Television Writing and Production while at Chapman University, where she also founded the school's first satire paper. She knew if she wasn't writing for the Harvard Lampoon then she was making one herself. The satire paper quickly became viral on campus and is now a campus institution with more than 20 staff members. Avery's writing has placed in over 15 script competitions and fellowships, most recently SlamDance, RoadMap JumpStart and Filmatic Inroads Fellowship. Her project, DAMSEL, is currently ranked in the top 1% of all 70,000 scripts on Coverfly.

Her background in comedy and performance help her with writing and pitching. From stand up to improv to sketch, she feels incredibly comfortable in the comedic space. She has trained at both the Groundlings and Upright Citizens Brigade and currently volunteers at the new Elysian Comedy Theater in Los Angeles. Oh, her sketch group Babe Motel keeps going viral...talking 4 million views. Avery is also a mentor for WriteGirl where she guides young girls in creative writing.

When a girl goes through her first breakup it feels like it is the end of the world...when a sudden alien invasion makes it so,

When a sorority girl invents the world's longest lasting tampon she is thrust into the spotlight as the new face of feminism and the most relatable inventor the world has ever seen.... but how can she tell people she's no one to look up to. Sex Lives of College Girls meets The Morning Show.

When a true crime loving and apathetic 20 something year old girl accidentally gets kidnapped into the drug ring of her dreams she decides she might actually be down to be a part of it. Damsel in distress? More like damsel in delight.