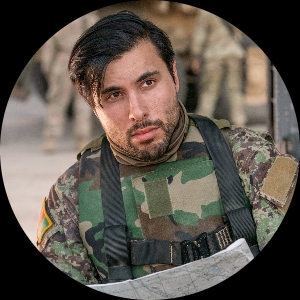 ARTUR ZAI BENSON (known professionally as ARTUR) can be seen recurring as dead-pan no-non-sense Khalil on “68 Whiskey”, a dark comedy about combat medics in Afghanistan. The show, from executive producers Ron Howard and Brian Grazer, premiered on January 15th, 2020 as the highest rated cable premiere. It's currently available on Paramount+. ARTUR Zai was born in a village near Kabul, Afghanistan, Stanikzai tribe but raised in UK and US, of mixed ethnic heritage. Speaks US and RP English. Also speaks Pashto, Dari, Arabic (Darija/MSA), and Spanish. Graduate and performer of The Groundlings Comedy Improv Theater and UCB, he's one of the 10 actors admitted to Lena Waithe's inagural Hillman Grad Lab 2021 out of 4500 applicants, a winner in Pop and Latin categories in International Songwriting Competition 2021 out of 26,000 submissions from over 153 countries.