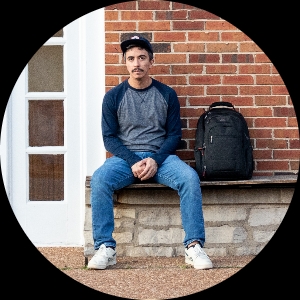 Andy Compton is an Asian American writer and director from the heart of the Midwest—St. Louis, Missouri. Once a hard-partying high school dropout from a dysfunctional home, Andy found sobriety in his late-20s, turned his life around, and went on to graduate Cum Laude from Webster University with a BA in Scriptwriting and a Minor in Film and Television Production. This sense of sweeping transformation often finds its way into his work, as his characters navigate small-town worlds in search of their own larger-than-life triumph, through which Andy balances his comedic sensibility with dramatic storytelling—shining a light on topics such as class struggle, addiction, and other dark aspects of life in the Midwest. These stories aim to uplift and inspire viewers to pursue their own self-actualization. During his time in film school, he wrote both of his 2021 Nicholl Semifinalist features, SUPLEX (Top 50) and BELLYACHE, along with writing and directing his 2020 short film, TIN BOX, Winner of Best Horror Short at Chicago Southland International Film Festival, Best Narrative Short (Audience Selection) at St. Louis Filmmakers Showcase and was made an Official Selection of St. Louis International Film Festival, an Oscar-qualifying festival. Andy’s writing is often amusing, at times—heartbreaking, but always feels undeniably human.

Dissatisfied with life, a cowardly 18-year old, obsessed with professional wrestling, seeks the courage to break free from his toxic family and dream-killing hometown when he joins a violent backyard wrestling league.

After being fired for giving a less-fortunate student free meals, a disgruntled lunch lady's life is turned upside down when her estranged daughter’s article about the injustice goes viral, propellig her to internet stardom while exposing old skeletons in the process.