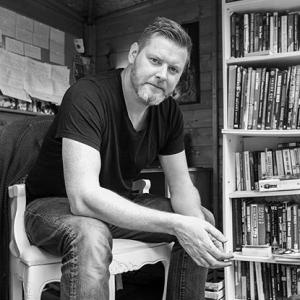 Andrew David Barker is an author and filmmaker. Born in Derby, England in 1975, Barker has had pretty much every job going. He has worked as a window fitter, a rail track worker, a factory worker, a carpet salesman, a car cleaner, a delivery driver, a bricklayer's labourer, a shop assistant, and a care worker, among others. None of them stuck.

In the late 90s he played lead guitar in a rock band. They got signed, made a single, played London, thought they were famous, and, subsequently, imploded.

As a filmmaker he wrote and directed the little seen opus, A Reckoning - a last man on earth tale which won acclaim from many who saw it - and the award winning short films, Two Old Boys and Shining Tor. He also scripted the forthcoming A.I. sci-fi short, Endling.

He is the author of The Electric, Dead Leaves and Winter Freits. He is currently crowdfunding his new novel, Mick & Sarah At The Pictures, with Unbound.

He now lives in Warwickshire with his wife and daughters, trying to be a grown up.

England, 1983. A political firestorm has ignited over the so-called "Video Nasties". In a depressed Midland town, three horror film fans go in search of the most notorious VHS on the market - a film called THE EVIL DEAD - leading them to the most significant days of their young lives.