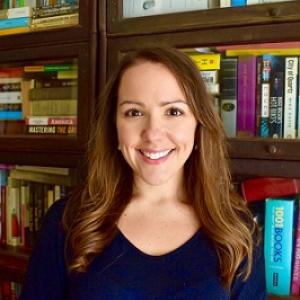 Amanda Pendolino is an upbeat comedy writer who has developed projects for TV, film and digital. After leaving the frozen suburbs of Buffalo for Los Angeles, she worked her way up from the mailroom to the feature lit department at Paradigm, before becoming a professional reader for Mandalay, Sierra/Affinity, Amazon Studios and Broad Green Pictures. Amanda developed the feature comedy BACHELOR BREAKERS with Kirsten “Kiwi” Smith (LEGALLY BLONDE, 10 THINGS I HATE ABOUT YOU) and the half-hour pilot NEVER DATE AN AQUARIUS with Julia Franz and Andy Fickman/Oops Doughnuts Productions. She was also hired to adapt the true story/Glamour article WE DATED OUR WAY ACROSS AMERICA as a feature for 26 Films and State Street Pictures.

Meanwhile, Amanda's experience as a private tutor inspired her comedy pilot DIARY OF A BEVERLY HILLS TUTOR - a script that earned her Finalist status in the Humanitas New Voices program. Most recently, Amanda published WEDDING PLANNING FOR THE BUSY FEMINIST, a humorous guidebook that has been featured by both Brides Magazine and The Knot. Amanda has a degree in screenwriting from Ithaca College and studied sketch comedy writing at LA's Upright Citizens Brigade.

DIARY OF A BEVERLY HILLS TUTOR

When her best friend abandons her for married life, a 28 year-old tutor moves into the lavish Beverly Hills guest house of her client, finding herself torn between a teenage daughter and a mom who wants to relive her wild years.