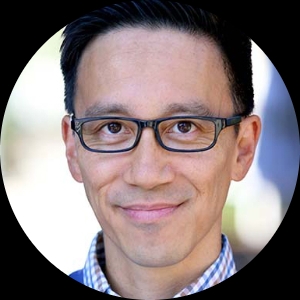 Albert brings a diverse set of life experiences to his writing and filmmaking: a childhood in Canada as the son of Chinese immigrants, a Ph.D. from MIT in Electrical Engineering, 16 years of marriage to his husband, parenting two kids adopted from birth, and an acting career working with the likes of Kevin Bacon, Helen Hunt, Liev Schreiber, Julia Stiles, Matthew McConaughey, and Jennifer Garner.

Albert wrote, directed, and produced his first film, FATE SCORES, an experimental silent film which was recognized by the National Film Board of Canada. He directed and starred in his follow-up film, THE COMMITMENT, which screened at over 50 film festivals on six continents, most notably edging out Oscar®-nominated MOONRISE KINGDOM to win a 2013 NASW Media Award. Albert’s third film, DESCENDANTS OF THE PAST, ANCESTORS OF THE FUTURE, stars Golden Globe nominee Tina Chen and won Best Screenplay at the 2015 NYC Downtown Short Film Festival. His latest narrative film, WELCOME TO THE WORLD, is a visceral film shot on an iPhone in one continuous 7-minute take for less than $140, and has so far screened in over 50 festivals on six continents.

Lately, Albert has been developing feature films rooted in science in an attempt to blend his love of science and technology with his love for cinematic stories. His hope is to convey the excitement and creativity of doing authentic science while telling unique, timeless, and emotionally engaging stories that explore questions that have remained deeply relevant throughout human history.

Currently, Albert is developing science-based feature projects including INCARNATIONS, about a distraught biologist who discovers a mysterious marker that launches him on a quest to scientifically prove reincarnation and reunite with his deceased four-year-old son; INCH AWAY, a gay sci-fi love story about a troubled gay man who discovers the shocking truth about himself and of the universe when his physicist husband and children mysteriously vanish on a road trip to his childhood summer home in Montana; and THE ELUCIDATION OF DR. PARK, about an Asian-American academic super-star in the final throes of her doctoral program in cancer biology who, under tremendous pressure, hits a crisis of faith and embarks on a journey to help a student overcome his struggle with depression.

In the wake of his four‐year‐old son's death, a distraught biologist discovers a mysterious marker that could be scientific proof of the afterlife, launching him on a quest to prove his theory and reunite with his son.