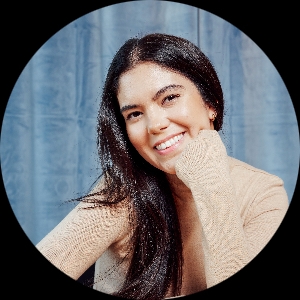 Raised an only child by her Cuban mother, aunt and grandmother in Miami, Adriana Caballero grew up in a real-life, first-generation Full House (picture way more estrogen and pork). After a childhood of writing elaborate diary entries and building an amateur reporter’s reel, she pursued a career in journalism at Georgetown University. While working at CBS News, she took a late-night writing class with Second City and realized she belonged on the funnier side of TV. Following graduation, she worked at The Late Show with Stephen Colbert for nearly two years in the talent department where she fluffed pillows for A-list (but mostly C-list) celebrities. Then one day she shoved everything into her Honda Civic and took a cross-country road trip to Los Angeles. She was a 2019 Sundance Episodic Lab second-rounder, a 2019 Disney ABC Writing Program semifinalist and 2018 National Hispanic Media Coalition TV Writers Program finalist. Her pilots have been selected as staff picks on Scriptd and performed live through the Breakthrough Reading Series. She is currently staffed on Tina Fey and Robert Carlock’s upcoming NBC comedy, starring Ted Danson and Holly Hunter.

THE SECOND LIFE OF EVA CASTILLO

A 28 year-old woman decides to turn her life upside down after surviving a car crash — she dumps her longtime boyfriend, quits her high-paying finance career and lands her dream job in morning news, but quickly realizes that starting over is a lot harder than she imagined.