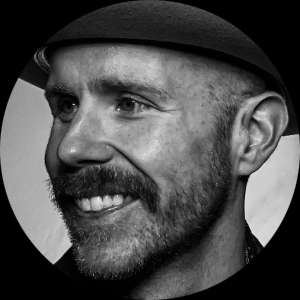 After growing up in the showbiz hotbed of Des Moines, Aaron moved to LA and got his start on set in film & TV production. He went on to create his own production company (ODDBIRD) to produce music videos and additional digital content when he's not writing. His growing script portfolio has garnered recognition on the Black List website's "Top Scripts" and The Red List while also finding success from numerous contests including the Tracking Board Launch Pad, Austin Film Festival, and Nicholl Fellowship.

Living on borrowed time since age 13, Aaron uses that levity and his “Iowa Nice” upbringing to explore complex characters in existential conflict with their environments through bold, genre-contorting stories with emotions that are universal to all.

Amidst an existential crisis, a self-destructive woman awakes to realize she's not only living in a computer simulation... but is now charged with fixing humanity.

Amidst his historic chase of Babe Ruth's all-time home run record, Henry Aaron, his family, and his bodyguard must survive the death threats and scrutiny that comes with an African American challenging sport's greatest record.