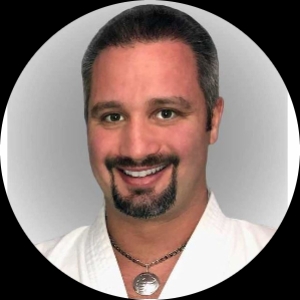 53 Seconds co-author, Master Aaron R. Sandubrae, began training in martial arts as a child. His first Sensei was his Father, Sensei Allen R. Sandubrae, who taught his son the traditional Japanese styles of Shotokan and Koi-kan. Aaron's training in Isshinryu started as a boy, under his Grandfather, with his frequent visits to California.

At the age of 19, Aaron Sandubrae Shihan moved to California for the sole purpose of training in Isshinryu Karate under the instruction of his grandfather, Grand Master Arnold R. Sandubrae, Ku-Dan, Hanshi, in Palm Springs, California. Aaron has earned the title of Shihan (Master Instructor) and has been certified to teach Isshinryu Karate and Self-Defense by Hanshi Arnold R. Sandubrae. Over the years Shihan Aaron Sandubrae has competed in many tournaments and collected many trophies in Kata, Kumite and Weapons. In 2005 he won his first international tournament, taking 1st place in Kumite (Sparring) and 2nd place in Kata, at the Isshinryu Hall of Fame. He was also awarded the 2018 Isshinryu Hall of Fame's Male Instructor of the Year, by unanimous decision. Master Aaron Sandubrae understands the benefits of competition, however, he firmly believes that martial arts is not about winning trophies, it is about self-defense and self-improvement. He is honored to preserve and further the art of Isshinryu, as well as the Sandubrae lineage and traditions for many generations to follow.

53 Seconds co-author, Sensei Veronica Sandubrae is Master Aaron Sandubrae's senior student and assistant instructor. She has earned the rank of Yo-Dan ( 4th Degree Black Belt) and the title of Renshi. Veronica has competed in many tournaments and collected various trophies in Kata, Kumite and Weapons. At the Isshinryu Hall of Fame Tournament in 2018 Veronica was a Finalist for Female Karate-Ka of the Year and took 1st place in Black Belt Kumite (Sparring). Veronica is also the author of several other scripts (such as “Colors of Love and War” and “The Keeper.”) She is a C.P.A. and works in corporate accounting when she is not writing or running the Dojo she and her husband, Aaron Sandubrae, own.

Aaron's Sensei and grandfather, Grand Master Arnold R. Sandubrae began his Isshinryu Karate training in 1973, under the instruction of Sensei Robert L. White and Sensei Sam Santilli and Master Willie Adams. From 1973 until 1986 he amassed over 200 trophies in all categories: Kata, Kumite, Weapons, and Breaking.

Grand Master Arnold Sandubrae has run his own Karate School since 1978, when he retired from the business world and moved to Palm Springs, California. At that time, with the approval of Master Adams, Master Sandubrae went under the leadership of Hanshi-Sei (Grand Master) Harold Long, Ju Dan, an original student of Soke Tatsuo Shimabuku (founder of Isshinryu karate). Hanshi-Sei Long was one of the first U.S. Marines responsible for bringing the style of Isshinryu karate back to the United States from Okinawa. Master Arnold Sandubrae remained his student until Master Long's death in 1998. In June of 2002, Master Sandubrae went under the direction of an old-time friend, Master Instructor Joel Chandler, Ku Dan, and remained his student until Master Chandler's death in 2012.

The following is a partial listing of major awards and honors that have been bestowed upon Hanshi Sandubrae since his entry into Isshin-Ryu Karate: