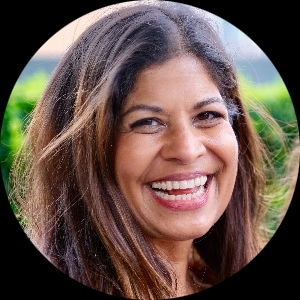 A first-generation South Asian (Indian) Film and Television Director in the Directors Guild of America, with nearly two decades of film and television production experience as a DGA AD and writer, Sonia represents the modern era of global storytelling.

A leader with a vision, Sonia is a recipient of the ABC/DISNEY Television Directing fellowship and directs both single and multi-camera narratives. She recently directed RAVENS HOME & COOP & CAMI ASK THE WORLD for DISNEY+.

Sonia worked her way up the Guild ranks as an Assistant Director, honing her craft alongside Academy Award-winning and nominated Directors including M. Night Shyamalan (The Sixth Sense, Unbreakable), Ron Howard (Ed/Tv, The Grinch) Paul Thomas Anderson (Punch Drunk Love) and Jason Reitman (Thank You For Smoking, Up In The Air.)

In television, she was the 1st AD for Emmy-nominated Directors including Joe Russo, Reggie Hudlin, and Ken Kwapis repeatedly.

Sonia is quick to think on her feet, and known to inspire everyone on the set, including some of Hollywood’s most accomplished talent; George Clooney, Matthew McConaughey Anna Kendrick, Christina Applegate, and Maya Rudolph.

Rooted in the spirit of her rich Indian heritage, East Coast upbringing, international study, and travels, Sonia brings a unique, multi-dimensional perspective to all audiences.

Through a lens that seeks to bridge the gaps in humanity, Sonia explores story and character with humor, compassion, and subtext, always intending to entertain, explore and inspire.

A Syracuse University graduate, Sonia began her career performing Stand-Up comedy in NYC. Her first job offer was to write for the TV show THE KIDS IN THE HALL. Knowing her scientist parents would never approve, she pursued her passion for filmmaking, and today her jokes are always welcome.

ABC/ DISNEY Directing Fellow / Up In the Air, The Sixth Sense, OutSourced
Producer
Film and Photography
« »