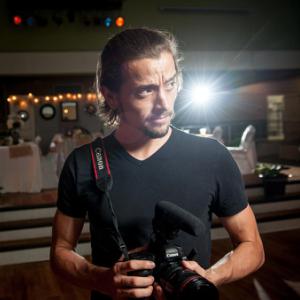 Nick Westfall is an award-winning writer/director based in New York City.

He is the co-founder of Dock Street Productions, producing and directing films for social change including: Finding Home: A Film for National Adoption Day (available on Amazon, Best Buy, and Barnes and Noble), 2047, and the 'Doin Fine' Official Music Video.

He is currently directing the 13-part television series, Tonight at Webster Hall.

Nick works closely with published novelists adapting their books into screenplays, the first of which has been optioned by producer Amber Adams.

Westfall earned his MFA in Screenwriting from Full Sail University, is a national leader in child advocacy programs, a SAG Signatory Producer, and is represented by Linda Langton at Langtons International Agency in New York City.

Logline: A young coder slowly spins into the "happiness without reason" world of a self-help guru, who has found a way to make anything he creates look to have gone viral. Why it's important: The self-help industry is a 15 billion dollar market almost purely based on repeat business, which if it actually worked, wouldn't have repeat customers. The purpose is not to point fingers and blame the industry for any wrongdoings; instead it is a film that begs us to look at why we’ve allowed the industry to take over our lives and possibly point out the quiet desperation in everyone. This film structures itself around the different phrases of self and what it means to be alive in today's world of self-promotion, indulgence, and worth. The Characters: When you control popularity, you control the market of everything… Holden Downten is a modern day Tom Sawyer, the megalomaniac self-help guru version. He has all the people around him whitewashing the fence of a very American Life. In his words, “People follow trends, and we’re staging them.” Under the guise of a life coach, Holden has found a way to become what he’s always wanted – debt-free. Holden’s bargaining power goes unmatched as all the people working for him do so under the promise of using the viral coding for their own endeavors. Oliver, the coder, is our way into this world - an observer with a millennial’s sense of morality. He’ll use the code to sell people on popularity. Do you know how many people would pay fantastic amounts of money to be popular? Businesses, artists, lonely people, people in general? The Workplace: N Common is Oliver’s day to day workplace where the philosophy is, “Here at N Common we find out what everyone has in common.” With social media tech startups on the rise, it tells us a lot about the audience of these companies – us. We go through life looking for friendship, connection, love, and money – all of which can be found more easily through these online companies. The commentary here with the N Common Company is the willingness of its users to give up all sorts of private liberties – as everything should be shared, liked, and compared. Filmmaking Style: All transitional and establishing shots in the film will start from the ground up as a reminder that although we live more and more of our lives in the cyber reality of the world, we are grounded in this reality – the one that was good enough for Thoreau to spend a couple years on a pond. This is a story that requires very little in terms of technical style and finance, but will give an audience a rich character driven comedy/drama with social commentary.

8 Slices JOHN GALT (late 20s) has over a million followers on his, “Peace up, Bash down” YouTube Channel – where he bashes/bullies people and businesses for profit. His newest victim is shaping up to be the employees of a small town’s beloved restaurant, Patronies Pizza. As we meet the employees group by group and are given the stakes verbally by JACK BEROUAC (20s), “Patronies Pizza is going under because of one small detail, single ply. Bankruptcy starts in the bathroom.” Toilet paper becomes the running gag for the rest of the movie. ANN RAN (30) is the standout protagonist among our quirky ensemble. She is a failed self-published author – who is determined to become her own boss. Doing whatever it takes to get there. John Galt, in disguise, is welcomed into Patronies Pizza as a new hire. When the Boss tells all of the employees to update their resumes, they all know the beloved place they call home will be going under. Later we find out who John really is. He creates one of his videos, “Bashing” the Patronies Pizza business and all of its red neck loser employees. Later on we find out John was a failed photojournalist and now, he just does what he can on his own. Jack takes John to a place called Crazy Mary’s for some photojournalism magic. Even Jack starts to see a different side of John here. The whole situation changes when a little boy comes into the Pizza restaurant yelling, “Peace up, bash down” – which, according to the rule John has given his audience on YouTube, the little boy is supposed to be featured on John’s channel for the bragging rights of finding him. Outside, having left his phone, John confronts the group, telling them that all they’ll ever be is someone else’s audience. John runs away. Later, he gets beat up by four dudes who follow his channel. Ann emerges as our leader. She finds a way to use John’s popularity against him. John forgot to log out of his YouTube account on Jack’s phone when he was downloading the footage of Crazy Mary’s – big mistake – Ann uploads her own videos on his channel, shooting all the employees who tell John’s followers what Patronies is really like. Then she puts a link on all of John’s videos to a crowd-funding site to save the restaurant. After three days of using John’s popularity against him, and John, having not taken down the donation link nor any of Ann’s videos (his quiet redemption) they save the restaurant. The final image is lead by Jack. He starts a playful war of two-ply toilet paper. What makes this unique? All of the characters take on the personas (only to a certain extent) of their favorite authors/philosophers – (Knee Cha, Jack Berouac, Albert Kamoo, Ann Ran). Think “Midnight in Paris,” but with trailer park kids who want to be like the real people they admire. This is the new-age Napoleon Dynamite dramatic comedy – with an emphasis on the latter. Themes Philosophically, the movie is a modern adaptation of Aristotle’s idea of master/slave. The world we live in today is the new renaissance, where anyone can be their own boss, but what does it actually take to rise to the top? What moral sacrifices? Are we seeing the inversion of “Content is king?” What are the fundamental differences of building a great resume vs. building a great eulogy? Other themes include, love, betrayal, dreams, and socioeconomics. Access Patronies Pizza is a real pizza restaurant that's willing to donate catering options and the location for the shooting (November-December) of this movie. The only stipulation is the owner asked that we not have any cursing or drug use in the movie. We are the creators of the heartfelt indie breakout, FINDING HOME, which became a Barnes and Noble bestseller and is currently on Amazon Prime. Budget Our DP Brad Walker is not only an established and terrific artist, but he also owns an entire grip truck worth of equipment we’ll need for the film. He’s also a dear a friend. Check out his reel at Lighthouse Films, Wilmington, NC. We will shoot the film on his full Alexa package (top camera and lenses combos in the business) all for a budget that’ll keep us under 100K. This is the next break out comedy of 2018, come be a part of it! Locations The Holden Beach area of North Carolina with all of our shooting locations for the best price, free. Cast Diversity, diversity, diversity. While we will only cast people who are right for the role, Nick never writes in race for his characters because he likes to be surprised in the auditioning process.

HAROLD AND THE PURPLE CRAYON

When a young boy receives a magical crayon, he draws his way into the world of imagination - everything he could ever want, he can create - there’s just one problem, imagination doesn’t come without fear.