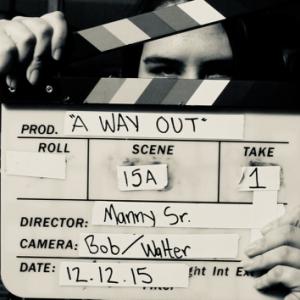 Reformed gang member-turned-filmmaker Manny Jimenez Sr. took his knowledge of the streets and applied them to Hollywood. Manny’s unique journey has led him to be the subject of numerous news stories on CNN, ABC, Fox, Telemundo and Univision. They’ve also led to articles in newspapers and magazines such as The New York Times, The Los Angeles Times, LA Weekly, Entertainment Weekly and Emmy.

As a gang consultant, Manny worked on such films as Ali G Indahouse, Training Day and Criminal starring Diego Luna. Gang-consulting led to screenwriting. Manny believes authenticity is key and he writes from the truth. Now, as a screenwriter, producer, and finally taking a seat in the coveted director’s chair, Manny wrote and directed the short film A Second Chance -- an anti-gang story that will be used to deter at-risk youths. He is also developing a feature film based on the same story.

Along the way, Manny joined the non-profit team of Southern California Crossroads, and Tribeca Teaches LA as a teaching artist/youth mentor. Manny and the Crossroads team later partnered with Oscar winner Bobby Moresco and The Actors Gym for a three-year mentoring program, in which Bobby directed the youths in the play The Brick and the Rose.

Although working in the entertainment industry is Manny’s main endeavor, he has found his true purpose in life by guiding young people towards finding their passion and showing them that there is a better life without drugs and gangs.

EAST OF THE RIVER

While trying to be a family man, a gang member is asked to kill his best friend, but on the streets, everyone knows there "ain’t no half steppin'.” Will he handle it, no questions asked, or will he walk away?

Based on a true story. After being released from juvenile detention, a grieving teenager fights his demons while facing his reality. A new life is in his grasp, but living in a world where violence triumphs over innocence, will he live another week to reach it?

A reformed gangster goes from gangbanging to dealmaking and becomes known as the C.A.A. of East L.A.