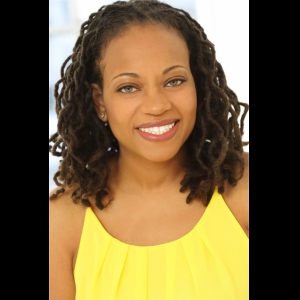 Atlantic City, NJ may be famous for its casinos, but if she has her way, it will soon be known as the birthplace of Keisha Boston Gallagher. Living at the intersection of righteous and ratchet, the actor and screenwriter tells stories with unmatched humor on the most complex issues.

In the seventh grade, her comedic charisma was in full swing, earning her awards for her personality such as “Most Enthusiastic.” In high school, she spent hours studying jokes and comedians from television shows like Martin and Comic View. She took what she learned and turned her classrooms into a stage with teachers rewarding her with time to tell jokes if she kept quiet during the lesson. Word about Keisha spread quickly, and she got requests from other students to perform between periods, making her late for class. To no one’s surprise, she was voted “Class Clown” her senior year.

Her gift for entertaining only grew and followed her into the call to ministry. (Apparently God calls people who listens to Yolanda Adams and Lil’ Kim back to back.) Keisha would give remarks at funerals, and tears would turn to laughter. She’d preach a sermon and churchgoers said it sounded like a comedy set. She was good at ministry and loved Jesus, but she was unfulfilled. She stepped away from church ministry and came out the closet... well, the creative closet... and is an out-and-proud actor and screenwriter.

Keisha enrolled in an acting class, secured an acting coach, and became a student in the Writing for Television Masterclass with Shonda Rhimes. To gain experience, she booked background work on projects like Creed II, Power, Orange is the New Black, and Law and Order: SVU and landed a speaking part in a commercial.

Her semi-autobiographical series, Saint Keisha, is a provocative exploration of friendship, ministry, and self-discovery funneled through the untold story of homelessness in Atlantic City, NJ. The pilot has been read by executives at two major production companies who said the script was “very smart” and “very funny” and that “Keisha has a strong voice.”

The vision of Saint Keisha is to find a home on a streaming service or cable network.

I was in the field man, I slaved for this/ had to talk to God, drop down and pray for this (I Cardi B 6:44-49) and “THIS” is Saint Keisha by Keisha Boston Gallagher. Enjoy!