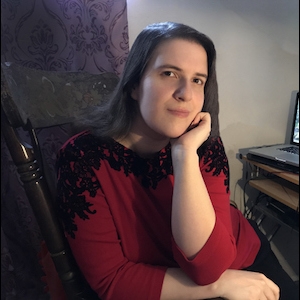 Currently a fellow the 2021 RespectAbility Summer Lab Program for Entertainment Professionals, Hilary Van Hoose writes character-oriented genre adventures and light-dramedies about fish-out-of-water or outsider protagonists who make a difference in people’s lives. In addition to creating fully realized, engaging characters for even the smallest parts, her writers’ room superpower is not being afraid to throw out the craziest story pitches to get the creative ideas flowing, and spotting/filling logic holes. Van Hoose’s screenplays have placed in such notable competitions as Sundance Episodic Lab, Austin Film Festival, BlueCat Screenplay Competition, and Scriptapalooza, and are ranked on the Coverfly Red List. She has worked telling stories as everything from an office PA to a producer-editor at several major companies, including, Amazon Studios, Illumination Entertainment, NBC Universal, CBS Television Studios, Josephson Entertainment, Laugh Factory, and Bad Robot.

Van Hoose grew up primarily in Northern California and Hawaii, where she developed a love of outdoor activities, and where her skills in beading and the culinary arts won her more than 160 awards in local competitions. Turning her creativity towards filmmaking, she earned her B.A. in Film and Digital Media Production from UC Santa Cruz (go banana slugs!). Entering as a Regent's Scholar, she won the film department’s Porter College fellowship for two consecutive quarters and gained certification in Leadership Training and Development from the UCSC Experiential Leadership Program, then graduating Phi Beta Kappa and Magna Cum Laude after completing the UCEAP French Language & Culture program in Paris, France.

Finally settling in Los Angeles to earn her M.F.A. in Film and Television Production from the USC School of Cinematic Arts, Van Hoose won the first ever Jack Oakie and Dale C. Olson “You Heard it Here First” Award for Excellence in Entertainment Communication in Honor of Victoria Oakie. Van Hoose chose an emphasis in comedy television because USC was the first university in the nation to offer a program dedicated to training filmmakers in the art of comedy. She not only took on a position as a member of the USC Comedy student board but also earned approval for her graduate thesis to be comprised of two half-hour pilots produced for the school’s flagship television production class (as an editor for the first, and as a director for the next year’s pilot episode). Van Hoose’s screenwriting hit its stride when she began writing genre hour-long content that retains subtle comedic influences.

Above all, Van Hoose is excited to create characters and stories that touch readers and audiences deeply, and become an important part of their lives.

The Night Coach from Sonora, Medicine Woman, The Cat of Versailles
Culinary Arts
« »

When a New York City medical intern of Diné/Navajo descent suddenly manifests inherited supernatural healing powers after her father's murder, she must learn to control her abilities and discover how a shadowy genetics corporation is involved, with the help of her long-lost medicine-man grandfather. House M.D. meets The Dresden Files.

WEST OF THE WASPS

When a female stunt pilot gets caught up in the Pearl Harbor attacks and seeing the oppression of her Asian-American best friend triggers her own memories of antisemitism against her family, she stops sitting on the sidelines and becomes a ferry pilot for the military during WWII by joining the WASP (Women Airforce Service Pilots).