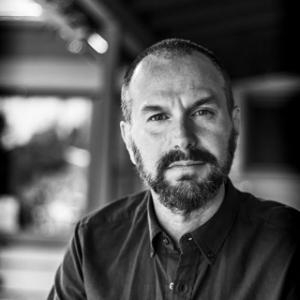 A writer with a distinctive voice inspired by the conflicting impulses just under the surface in all of us,

Greg Chandler is known for his vision of a gothic, neo-noir suburbia. He creates a dark world, violent yet funny, familiar yet hypnotically exotic. A rough, tough world, that surprises with its compassion and lack of cynicism.

Chandler’s first short film, SODA POP, appeared in over fifty film festivals and garnered “favorite of the festival” awards internationally. The success of SODA POP led to Chandler’s first feature script, LEATHER, about a sexually ambiguous sandal-maker living as if it were the 1880s in present day Upstate New York. Directed by Patrick McGuinn, LEATHER premiered at the Philadelphia QFest in 2013, won an audience award at The Palm Springs Gay and Lesbian Film Festival, and is now a popular rental on Netflix, and streaming on Amazon. A cult following has grown around LEATHER.

His second feature script, A NIGHT OF NIGHTMARES, a female-centered, character-driven horror film directed by indie-favorite Buddy Giovinazzo, garnered excellent reviews at the 2013 Fantasia International Film Festival in Montreal and at London’s FrightFest.

His script, MARROW, a thriller that explores the macabre side of adoption and suburban life, won 1st Runner Up screenplay at the 2015 Independent Filmmakers Showcase in Los Angeles. His script, RANCHO MIRAGE, about a cult-like trio of criminals deep in the California desert who storm into the life of an aging Hollywood star trying to bootstrap himself out of retirement, has also earned awards at various film festivals.

Active in the publishing world, Chandler has written many short stories and essays for underground journals and popular magazines. He is the author of AMERICAN UPSET, and the soon to be published novel BEE’S TREE.

Chandler made his directorial debut in 2019, with the short GUARDIAN, starring Utsav Astavakra and Doris Martin. Chandler also wrote the film, which is about a suicidal young man’s chance encounter with Vita, a strange woman who helps him to find his inner power, the ability to make energy balls, and a reason to live.

Chandler was born in Santa Monica and raised in the LA suburb of Arcadia before earning degrees at USC and Columbia University. Greg Chandler lives in Pasadena.