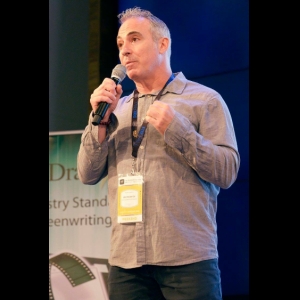 ERIC RUDNICK is a playwright, TV writer, & screenwriter. In the theater, his plays have been produced in New York and Los Angeles, & have received reviews from Broadway World, The LA Times, & LA Weekly, which his mother has had framed. Turning his attention to TV, Eric won the ATX Festival's TV Pitch Competition for his pilot, INCOMING. He went on to sell the pilot on a pitch to TNT. He has also optioned a pilot to FOX. Eric created, wrote, & produced the webseries THE EDGE OF ALLEGIANCE, which premiered on the front page of Funny or Die. Eric’s scripts have placed at Sundance, Austin Film Festival, & PAGE International, among others. He has been featured in Entertainment Weekly & in Deadline, & has written for the WGA platform WGAW Connect as well as for the website The Successful Screenwriter. Eric has also worked in reality TV, & has been a writer, supervising producer, and senior producer on dozens of episodes of some of America’s favorites. Eric teaches writing at the LA-based school Script Anatomy & volunteers with the great get-kids-writing groups Young Storytellers & 826LA. He created & will be co-hosting the upcoming podcast from the Los Angeles playwrights collective, The Playwrights Union.

A Navy veteran and her gay teenage son run a new kind of shooting range in Utah where they help clients deal with their gun-related trauma. She's confronted by her past when her ex arrives in town on a mission to put the family back together.