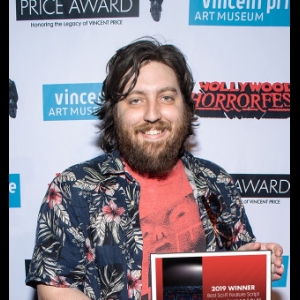 Ashley James Louis is the screenwriter of the new thriller, THE LAST VICTIM, which is now on HULU and stars Ali Larter, Ralph Ineson and Ron Perlman. Louis recently won Grand Prize at the Stage 32 Sci-Fi / Fantasy Contest for his screenplay CATALINA, which also won "Best Sci-Fi Script" at the iconic Hollywood Horrorfest.

"Looking for a bloodthirsty little thriller? How about THE LAST VICTIM (Hulu)? Ron [Perlman] doesn't have much to do, but Ali Larter is in overdrive. Like a combination of Joe Pickett and Cormac McCarthy." - STEPHEN KING, author of THE SHINING.

“The Last Victim is a thrilling neo-western. [It's] an absorbing film, with some stunning cinematography and a gripping storyline.” - Horror Buzz

“…a throwback to classic noir, mixed with the writing styles of the Coen Brothers and Quentin Tarantino. If that sounds like high praise, that’s because it actually is.” - Nightmarish Conjurings

“A tense and satisfying thriller. The Last Victim is a film that marks its makers as talents to keep an eye on. 4/5 Stars.” - Voices from the Balcony

“The Last Victim is a layered, thoughtful, and satisfying dose of gritty cinematic pulp fiction. 4/5” - Without Your Head

A LONG SHADOW AT NOON

Oklahoma, 1991 - After covering up a brutal murder, a cop draws the suspicion of a fellow officer on his small town force when she sets out to solve the crime by saving the only witness — an eight year old boy.