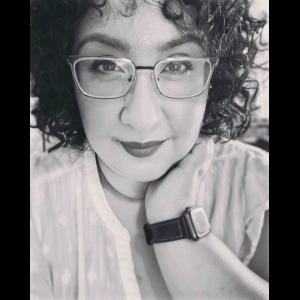 Ana Lydia is a born and bred Angelino by way of the San Fernando Valley. She spent her childhood summers and five years in Mexico where she quickly learned that she was too American to be Mexican. The irony being that she was also too Mexican to be American. The duality of her bicultural upbringing shaped her teenage years and was a harsh homecoming gift when she returned to the US finish her middle and high school education. Uninterested with school life, Ana Lydia became obsessed with foreign cinema, Grace Kelly, English literature, and 1950s fashion. To make sense of the valley, her strict Mexican parents, and the heat of the San Fernando Valley, she used paintbrushes to create surrealist realities that made more sense in her teenage mind. When the colors and textures didn't quite match what was in her head, she began writing short stories, plays, and eventually graduated with a degree in Marketing. A natural storyteller, Ana Lydia established herself as a leading multicultural communications strategist telling her clients stories, writing PSAs, and directing. When the stories she could tell about her corporate clients began to be limited by their budget, she started to blog under the "Cabeza de Coco" Spanish play on words about her reality: brown on the outside and white on the inside. Realizing that her world didn't exist in the films and TV shows she watched, Ana Lydia took to photography to document her version of the world around her. Photography was, in her words "the gateway drug" and creative muse that allowed her to find her voice and eventually landed her in the Film Studies Program at Art Center College of Design. Pushed by the Art School culture and fully immersed in her vision, Ana Lydia is no longer looking for others to create films and programs that show her reality. She has, instead, written and directed short films that tackle social issues and represent the diversity of the world, including MEET KENNY and FALLING OUT. She shares a different perspective about the past, with documentaries such as THE PLAYBOY NEXT DOOR and DAMES, BROADS AND THE CODE, and explores today's reality as lived by her female-led TV programs EL LAY and THE ACADEMY. Ana Lydia is married, babies her Boston Terrier "Maya Candice," and lives in her 91-score walkable neighborhood in West Los Angeles.