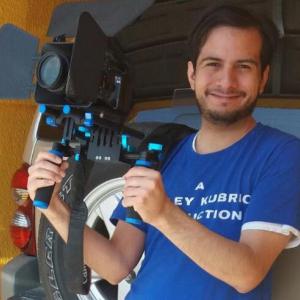 Oscar Moreno was born and raised in Ciudad Juárez, Mexico. His thriller "Whispers" was recently optioned by Fankle Films. His short films and scripts have won awards and placed in contests and festivals around the world.

A German actress and a Latino artist collide when the former becomes a spy for the Nazi efforts in Mexico and the latter partners with the FBI to stop her – and her colleagues’ – political and military machinations. Inspired by real events.

Hoping to be reunited with her abducted mother, a teenage girl and her best friend run away from home to make alien contact as they're chased by their families, friends and the law.

A girl with teleportation powers must help refugees, runaways and other people escaping from the evils of the world as she finds herself chased by international law enforcement and criminals.

After a fight dog escapes from his ruthless master, he sets out to rescue the pup of his last opponent from the humans and dogs chasing them.