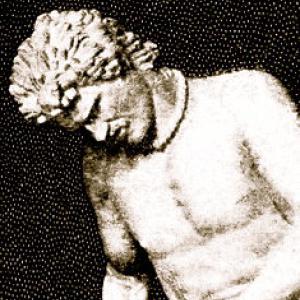 After ten years of war, the catastrophic destruction of Planet Troas leaves Odysseus and his crew stranded a thousand light years from civilization in a crippled spaceship, hunted by the Trojans’ vengeful god. Their only hope? A mad seer who claims he can guide them home. Inspired by Homer's epic poem.

50 years in the future. Humanity has colonized outer space, relying on a force of armed drone spacecraft to keep the interplanetary peace. When these drones turn on their creators, a washed up military pilot must join forces with a band of dangerous mercenaries to save the planet.

Magic has awoken in the Wild West. Forgotten creatures walk the earth, priests wield arcane power, and a race of demons has hunted the human race to the brink of extinction. As the demon-host prepares for its final assault, a disgraced warrior-priest sets out to rescue the prophesied last hope of mankind: an eight-year old Native American girl in whom burns the power of the stars.

Leonardo da Vinci is called out of exile when his estranged apprentice reconstructs an ancient weapon of mass destruction - based on Leonardo’s own research. Terminally ill and now facing a madman of his own making, Leonardo sets out to prevent the violent downfall of western civilization with the reluctant help of Nostradamus, Anne Boleyn, Machiavelli, and Vlad Dracula.